On May 30, 2012, Human Rights Watch (HRW) joined hands with The Global Network For Freedom Expression (IFEX) to publicly voice concern regarding the conviction of 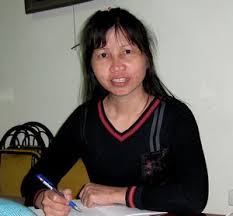 , condemning the actions of the Vietnamese government. Khuong was convicted on December 29, 2011 for violating article 88 of the penal code forbidding any individual from “conducting propaganda against the Social Republic of Vietnam”.

Ho Thi Bich Khuong’s was arrested for releasing interviews to foreign media that the civil court deemed to be critical of the Vietnamese government. Khoung was said to be producing, storing and distributing documents that were considered by the court to be in direct opposition to the state.

This was not Khuong’s first stint in prison. During her previous years in prison, Bich Khuong wrote a series of prison memoirs. From July to August of 2009, Nguoi Viet Online, an influential Vietnamese American newspaper located in Orange County, United States, published her series of memoirs. In her writings, Khuong mentioned she had been the victim of a series of inmate torture sessions conducted by investigators during the pre-trial detention. She also wrote that she had been abused and beaten by her fellow inmates.

But while the Vietnamese government condemned her actions, foreign activists praise them:

“Vietnam should be grateful that people like Ho Thi Bich Khuong call attention to local abuses,” said Phil Robertson, deputy Asia director at Human Rights Watch. “They give the government an opportunity to investigate and show commitment to the rule of law. When the government instead clamps down on the media and locks up independent bloggers, it simply encourages further corruption and abuse of power.”