KELCEY LORENZO WRITES – English-speaking K-Pop fans no longer need to experience one-sided love from their idols and favorite groups from behind their computer screens. After School Club (ASC), produced by Arirang, is a web-talk show that allows international fans (fans not domestic to South Korea) to live video chat with their favorite idols.

Throughout the hour, idols talk with their fans through Google Hangouts, play games with the MCs, and answer questions sent in by fans through Twitter.

Fans can also use Twitter to send in “Selca Proof Shots” (selfies of themselves watching the show) to After School Club’s Official Twitter for an opportunity to win autographed albums.

ASC thrives on social media and online resources prior to the live show as well. The showrunners use Google Forms to select the fans who will get to “Hangout” with the idols and promote upcoming guests on Twitter and their MCs’ various social media.

Since 2013, ASC has grown tremendously, garnering a strong following and a presence in the K-Pop fandom. The show has currently aired over 160 episodes and featured a number of guests, from rookie groups to veteran artists. 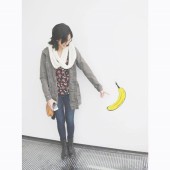 Kelcey Lorenzo is a Film and Television Production Major and a Journalism and Asian and Pacific Studies Double Minor. After college, she hopes to pursue a career in film development, producing, or post production.