ADRIAN NARAYAN WRITES — It’s become quite clear that the rest of the world has turned its eyes towards the United States when it surveys ongoing civil unrest around the world. And how sad is this?

Some countries have had to issue travel warnings due to recent internal protests, but not the U.S. – at least not yet. But it is no coincidence that domestic tension here is in part a product of the disproportionate rate of police brutality towards African-Americans prevails in the United States.

Indeed, with the fatal shootings of African American males, Philando Castile and Alton Sterling by white police officers on separate occasions, anti-racist Black Lives Matter protesters have peacefully taken to town halls and police headquarters across the nation. And as community tension with the police force may be heightened, let’s not overlook that these protests aren’t meant to bash police officers but to bring peaceful awareness to the United States’ institutionally racist criminal justice system.

Some may argue that the recent shootings of five Dallas and three Baton Rouge police officers were promoted by the Black Lives Matter movement. While this statement is untrue and the intentions of the movement are peaceful, police and community tensions have risen dramatically.

Amidst the protests taking place across the nation, a photograph captured last month by Jonathan Bachman has taken over the front pages of news and social media outlets. This image portrays a woman, identified as Iesha L. Evans, standing her ground in a summer dress with her arms out. She stands gracefully, well aware that she’s going to get arrested by Louisiana state troopers who are dressed in riot gear that look like costumes straight out of a Star Wars film. Despite all the armor, with their heads and backs yanking backwards as they reachto secure her hands, it’s almost as if Evans had become a force of nature that was able to repel the policemen out of her pathway. Some have compared this to Rosa Park’s refusal to give up a seat at the front of a segregated bus, or even to a modern-day superhero. Several, however, commented that Evans was breaking the law and deserved to spend time in jail. Some have even praised her as a modern Statue of Liberty, leading a divided country back towards a united pathway.

As many comparisons to iconic images have been thrown around, one takes the cake:   to “Tank Man” facing down Chinese military tanks during the Tiananmen Square protests of 1989. 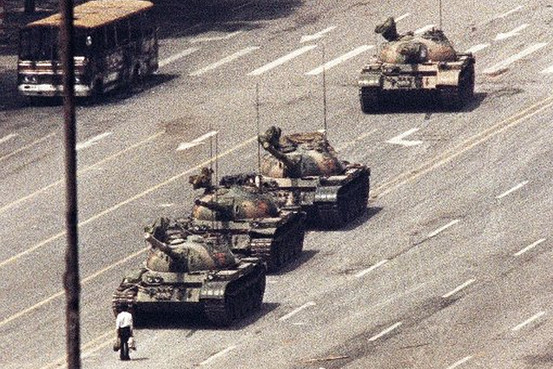 One could argue that this image of “the modern statue of liberty” is similar to the Tank Man, but that isn’t entirely correct. That’s not to say, however, that there aren’t similarities that should be pointed out between the two iconic photographs. For starters, both images are reliant on a larger issue: protesters in action because of a student-led movement backed up by community members aiming to mobilize as an agency against a broken component of their respective governments.

In China, what happened in 1989? An astrophysics professor and a group of students were the engine that sparked the Tiananmen square protests. Like the Chinese protests, many college professors, and students are the backbone of the Black Lives Matter movement that aims to fix America’s broken criminal justice system.

But while the intention behind both protests is clear, these protests are highly contextual in their respective settings. A good percentage of the Chinese protesters were fighting for democracy, freedom of the press and freedom of speech among other demands, while American protesters are currently fighting an age-old fight for government reform with the criminal justice system that has its origin in American slavery. So the differences are both substantial while at the same time illustrative of major fissures within governing systems.